Ten reasons to welcome the Unitary Patent system, or: why the system is a great thing for innovative UK businesses.

The Unitary Patent system would be cost effective for everyone. It becomes cheaper per country when compared to the traditional bundle of European patents as you seek to protect your invention in an increasing number of countries.

As for users who don’t usually consider protection outside of the UK, France and Germany, for the small price of two additional territories they can extend their patent to all of the other states of the UPC.

Further savings are to be found in reduced validation and translation fees required on grant of a patent application when pursuing the unitary route. Unlike a conventional European patent, there is no requirement for a Unitary Patent to be validated separately in each national territory, which means no local patent office fees and no need to engage local attorneys.

Further, a Unitary Patent need only be translated into one other EU official language after grant, whereas for the current non-unitary European patent, translations need to be filed for many states for the patent to be validated in those territories.

Firstly, the use of a single court system avoids the scenario of different courts in different countries reaching conflicting opinions on the issue of infringement. Even more appealingly, as the Unitary Patent covers a large number of European territories, it would be possible to use the court to seek relief for infringing activities happening across all of those different countries.

The UPC offers a range of remedies to patent proprietors, most valuable of which would be the ability to seek pan-European injunctions. This greatly simplifies the process of enforcement, as a single injunction can be obtained from a single court which has effect in all member states of the UP.

Moreover, the financial recompense available in damages due to patent infringement would apply to infringing activity in all UPC member states where the patent is in force. This avoids the need for separate national proceedings to establish damages across each of the (at least) 17 member countries. This makes it practical for patent proprietors to obtain damages in respect of acts of infringement in territories where previously it would not have been cost effective to launch a separate action despite, for instance, there being significant sales of infringing products in such regions.

Further, many countries have territorial limitations on indirect (or contributory) infringement, where a defendant is supplying a key part but not the whole of a patented apparatus. Typically, it is a requirement that the eventual direct infringement, such as making the whole apparatus, also occurs in the particular country in order to bring a case for indirect infringement. As the UPC covers a large number of territories it makes it harder for a potential infringer to thwart patent coverage by making parts in different territories for assembly in a jurisdiction not covered by the patent.

It is expected that the UPC would provide robust decisions as a result of the standardised practices between divisions and the diverse and well-trained pool of judges. This ensures that issues can be expertly tried, and decisions relied upon in territories previously unaccustomed to handling large volumes of patent litigation. This consistency of practice would provide a level playing field for businesses across Europe. Judges have been recruited from a broad range of countries so would be able to apply and interpret the rules of the UPC drawing on the best practices from various jurisdictions.

The court system is intended to operate so that cases can be dealt with quickly from commencement to trial (12 months) and the expectation is that trials would typically last only one day, reducing cost for all parties.

SMEs can greatly benefit from the Unitary Patent (UP) and the UPC. Not only does the UP provide substantial savings on renewal fees across the entire (at least) 17 UP territories but the UPC also offers several other benefits to SMEs.

Firstly, the UPC offers a centralised approach for European IP disputes (substantially cheaper than multiple national actions). Secondly, small and micro-entities are entitled to a reduction in court fees. The ability of patentees to conduct a single infringement action across many jurisdictions provides excellent leverage when negotiating settlements to disputes.

The Unified Patent Court would resolve cases much more quickly than is possible under the current system. If a case is brought, it would be processed, and a judgment passed down within a year. This means that businesses can bring their cases to court more quickly if needed. The Court also intends to hear trials in just one day, much like the system at the European Patent Office for oppositions.

There may previously have been some reluctance on the part of patent proprietors to pursue a case because it can take two years or more to achieve a resolution, even just in one country, along with the increased costs that a prolonged litigation period and multi-day trial can bring. The relatively quick resolution to a case, combined with the fact that the outcome applies across all member states, would help to provide certainty to businesses on a swifter timescale.

Where previously a European patent may have only been validated in, say, five EU countries, the Unitary Patent will cover at least 17 of the 27 member states for a lower cost to that of the five previously. These “bonus” countries could provide unexpected benefits to companies. Infringements can arise anytime and anywhere, so the impressive geographical coverage provided by the Unitary Patent could prove useful in the future.

Seven: English would be the primary language

English would be the primary language of the UP system. All UPs would have English version.

For businesses in the UK, US and other English-speaking countries, there is a clear advantage to being able to litigate in one’s mother tongue. This would be possible at all Unified Patent Court hearings. Costly translations can therefore be avoided.

Once the unitary patent system is established it would also no longer be necessary to obtain post-grant translations, and all Unitary Patents would have an English version, although post-grant translations would continue to be a requirement for a transitional period. However, during the transitional period all non-English patents would be required to be translated into English. As well as simplifying processes, these changes should also help to reduce cost.

The UPC would have a common process and timeline for all divisions increasing clarity, reducing complexity and delay.

The Unitary Patent Court would have a common process and timeline for all of its divisions throughout Europe. This would increase the clarity of procedure before the UPC and reduce delay. It means that a UPC litigator can be assured that a case brought in Stockholm would be handled the same as a case in Munich or Paris. A clear timeline for procedure, with deadlines for the completion of each stage, would make it easier for parties to plan and make decisions around proceedings.

The UPC has set itself the goal of hearing patent cases within twelve months from commencement to help to prevent unnecessary delay. The goal of a one-day trial has been set, which should limit the costs involved.

The UPC would offer increased predictability and lower costs compared with the existing situation where cases have to be taken in each national jurisdiction of interest.

The first Unitary Patents (UP) are expected to be registered and in effect before the end of 2022 and will cover at least 17 countries.

With a population of over 300 million people and a GDP valued over $13 trillion, a Unitary Patent would cover the majority of the European Economic Area. Future Unitary Patents are expected to include coverage for even more countries (with all EU countries except for Spain, Poland and Croatia, having signed the relevant agreements). Further, the jurisdiction of future UPs is capable of expanding even further as additional territories join the EU, along with a possible developments that might allow for non-EU countries to sign up (such as Norway and Switzerland or even the UK). 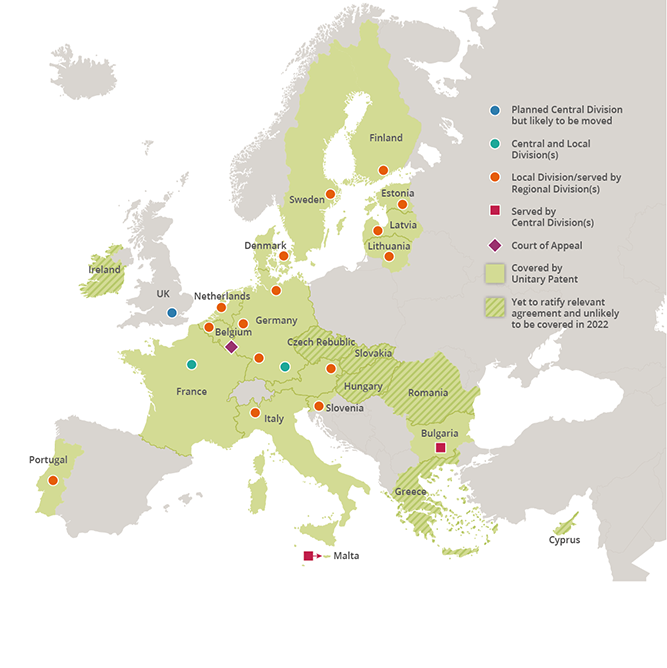 The unitary patent system offers much greater simplicity for users.

Instead of having to validate and renew a granted European patent on a country-by-country basis, innovators would be able to achieve the same protection with a single Unitary Patent maintained by a single renewal fee. That means fewer deadlines to remember and fewer reminder emails from your renewals service, less administration, and lower bills.

Post grant, litigation relating to a Unitary Patent is handled by the Unified Patent Court, a new court for patent matters in Europe. This means that claimants and defendants need not exercise or defend their intellectual property in multiple, separate jurisdictions but rather use a single procedure in a common court and be granted a single decision that takes effect in all territories covered by the Unitary Patent. This provides a centralised, efficient and cost-effective system for managing post-grant proceedings, such as claims for infringement.

We use cookies on our website to give you the most relevant experience by remembering your preferences and repeat visits. By clicking “Accept All”, you consent to the use of all cookies. However, you may visit "Cookie Settings" to provide a controlled consent.
Cookie SettingsAccept All
Manage consent

This website uses cookies to improve your experience while you navigate through the website. Out of these, the cookies that are categorized as necessary are stored on your browser as they are essential for the working of basic functionalities of the website. We also use third-party cookies that help us analyze and understand how you use this website. These cookies will be stored in your browser only with your consent. You also have the option to opt-out of these cookies. But opting out of some of these cookies may affect your browsing experience.
Necessary Always Enabled
Necessary cookies are absolutely essential for the website to function properly. These cookies ensure basic functionalities and security features of the website, anonymously.
Functional
Functional cookies help to perform certain functionalities like sharing the content of the website on social media platforms, collect feedbacks, and other third-party features.
Performance
Performance cookies are used to understand and analyze the key performance indexes of the website which helps in delivering a better user experience for the visitors.
Analytics
Analytical cookies are used to understand how visitors interact with the website. These cookies help provide information on metrics the number of visitors, bounce rate, traffic source, etc.
Advertisement
Advertisement cookies are used to provide visitors with relevant ads and marketing campaigns. These cookies track visitors across websites and collect information to provide customized ads.
Others
Other uncategorized cookies are those that are being analyzed and have not been classified into a category as yet.
SAVE & ACCEPT
Powered by